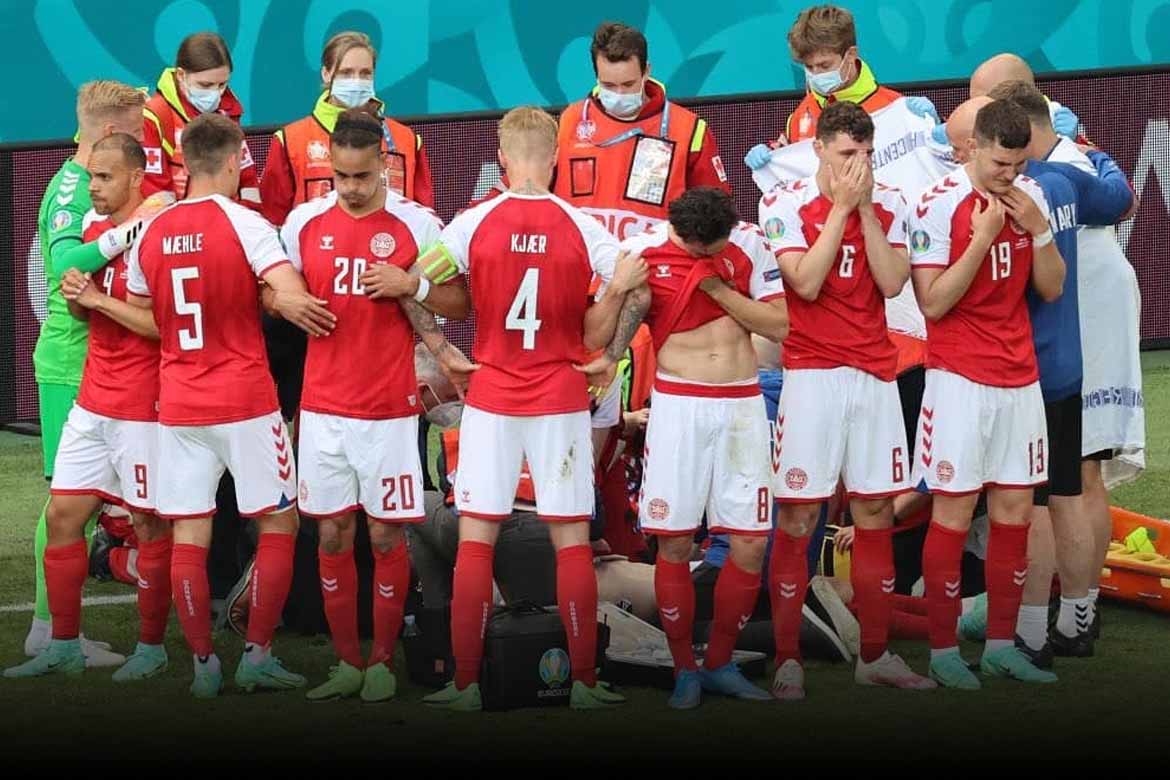 Finland marked their first appearance at a major tournament with a 1-0 win over Denmark but their opening Euro cup 2021 Group B match was overshadowed by the collapse of Christian Eriksen.

The match at the Parken Stadium in Copenhagen was suspended shortly before half-time after Inter midfielder Eriksen collapsed to the ground with no one around him.

Team-mates and referee Anthony Taylor called for immediate help from medical staff, with the players forming a protective barrier around Eriksen while efforts were made to resuscitate him.

The 29-year-old was carried from the pitch, but positive news followed with the Danish Football Union stating Eriksen was “awake” and set for “further examinations” after being taken to hospital.

Both sets of players decided to resume the game after more than 100 minutes away from the pitch, with Joel Pohjanpalo sealing an historic triumph for Finland shortly before the hour mark against an understandably deflated Denmark side, who missed a late penalty through Pierre-Emile Hojbjerg.

Denmark started on the front foot, with Jonas Wind, Hojbjerg and Eriksen forcing Lukas Hradecky into saves inside the opening 20 minutes.

The game was suspended for almost two hours following Eriksen’s collapse, the players ultimately returning to finish the remaining few minutes of the first half before a short half-time interval.

Despite Denmark’s dominance, it was Finland who opened the scoring with their first attempt on goal, Pohjanpalo heading through the weak hands of Kasper Schmeichel in the 59th minute.

Kasper Hjulmand’s side had a golden opportunity to draw level 16 minutes from full-time when Paulus Arajuuri brought down Yussuf Poulsen in the penalty area, but Hojbjerg’s tame spot-kick was kept out by Hradecky.

What does it mean? Finland’s famous win will soon be forgotten

Ordinarily, Finland beating a side 44 places above them in the world rankings in their first-ever European Championship match would be a head-turning result.

As it is, the win – achieved thanks to Finland’s solitary effort on goal – will largely be forgotten following the distressing scenes involving Eriksen.

The reports coming out of Denmark on Eriksen’s condition while his team-mates played out the game were encouraging and their attention will now surely turn to his recovery rather than dwelling on an opening-day defeat.

Bayer Leverkusen goalkeeper Hradecky made six saves to deny Denmark, the most important of which was to keep out Hojbjerg’s penalty. That save meant he became only the third goalkeeper to save a penalty on their debut appearance in the European Championship after Przemyslaw Tyton in 2012 (for Poland against Greece) and Trols Rasmussen in 1988 (for Denmark against Spain).

Hojbjerg made more successful passes (78) than any player on the pitch and his 11 possession gains were only bettered by Daniel Wass (12), but the Tottenham midfielder was unable to net from the spot and secure what would have been an emotional point for his side.