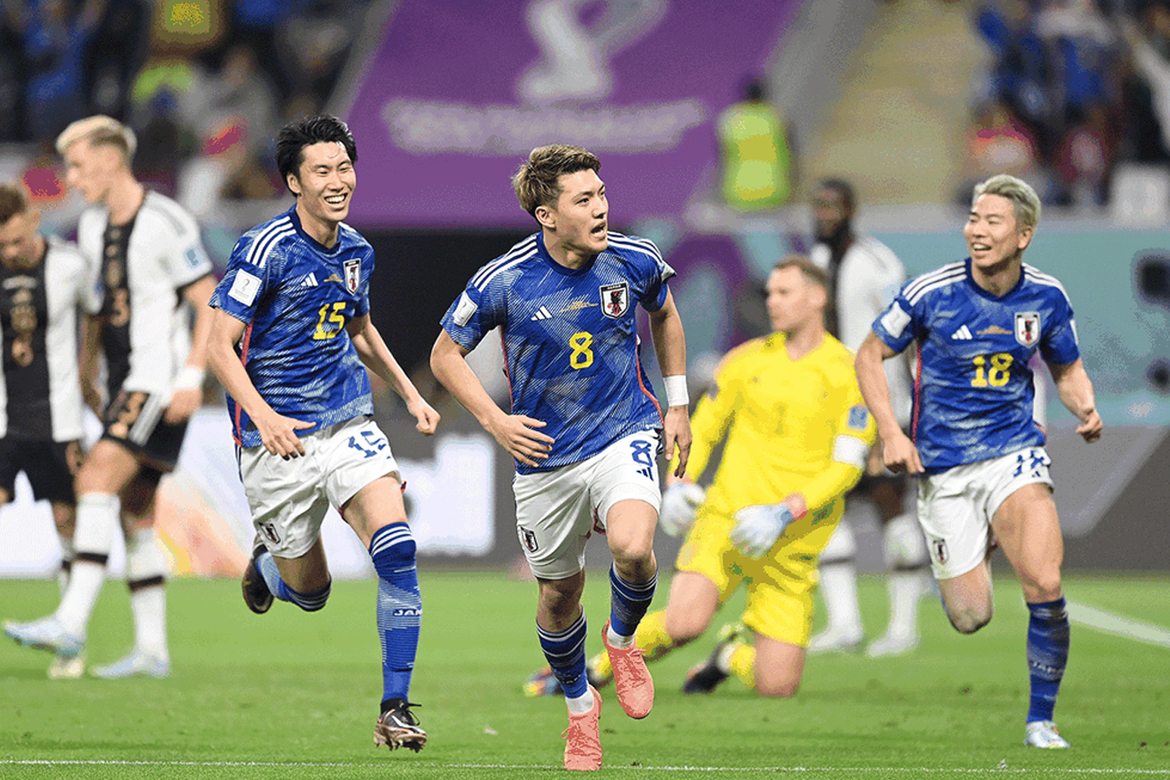 After Saudi Arabia’s seismic victory over Argentina on Tuesday, this was another huge shock in Qatar.

It left Germany’s players silently slipping away from Khalifa International Stadium at full-time, and the Japan squad celebrating in front of their ecstatic following.

“It is a dream come true,” winning goal scorer Takuma Asano said. “We knew we could do it, we had a dream like this.

“We watched the Saudi game and thought we can do it – then we just did it today.”

Skipper and former Southampton defender Maya Yoshida said: “Big win, massive win. But it is still tough to go through. It is absolutely amazing though, we have to be humble and very careful.

“We present Asia and many supporters from Asia supporting us today. This is the beauty of football.”

“We are achieving global standards”

Japan fans were in fine voice before, during and after the game.

On the metro to the stadium, Japan supporter told that his side would win 2-1. There wasn’t any real conviction in his statement, but how right he was.

Samurai Blue supporters were bouncing at the Sport City stop outside the ground, and it continued inside with the pocket of fans near an ‘Ultra Nippon’ flag chanting, singing and banging their drum throughout the game.

Germany fans were vastly outnumbered and deafeningly outsung, their only real cheer coming when Ilkay Gundogan scored from the penalty spot for a 1-0 half-time lead.

Japan failed to have a shot on target in the opening period but scored with two of their three efforts in the second period to complete a superb turnaround.

Five of Japan’s starting XI play in Germany, as well as Ritsu Doan of Freiburg and Bochum’s Asano, who both came off the bench to score their goals.

There may be an awkward exchange if their country progress to the last 16 and send the four-time champions home at the first hurdle for the second consecutive World Cup.

It was supposed to be different for Germany this time.

Dumped out of the group stage at the World Cup in 2018, stunned by another Asian opposition in South Korea on that occasion, this was a shot at redemption for Hansi Flick and his men.

But Japan soaked up the pressure and had just 26% of possession, to hand Germany their first defeat in 26 games after scoring the opening goal in World Cup matches, stretching back to 1994.

Moriyasu added: “I believe it is a historic moment and a victory to say the least. If I’m thinking about the development of Japanese football, we are building up and players are going abroad.

“We believe those leagues have contributed to the ability of our Japanese players, so we are very grateful and respectful to that. But no matter the opponent, we go for the win.

“Many German people and so many brilliant players and trainers have contributed and helped us in Japanese football. Today Japan won. However, Japan wants to continue learning from Germany and the world to play. That’s our future idea.”

With a heavyweight clash up next against Spain and rounding off against Costa Rica, Germany have just a 37% chance of reaching the next round, according to statisticians Opta.

The result also meant Germany lost a game after leading at half-time in the World Cup for the first time since June 1978.

A downbeat Flick said: “Of course know with this defeat and zero points we are under pressure. There is no question about that.

“We can only blame ourselves. We have to make sure we can come out of this and be courageous and decisive.”

Flights to UAE: Fares slashed by 50% during Black Friday sales

In the near future, Mercedes-Benz will introduce acceleration subscription fees