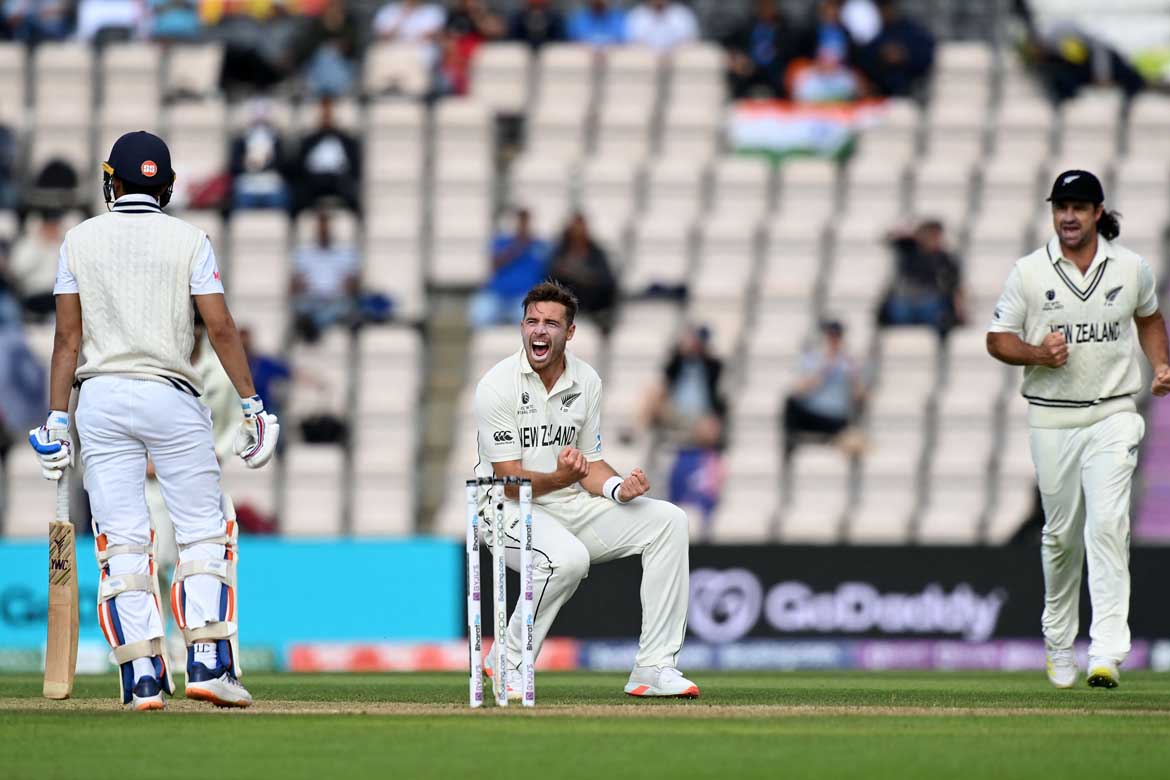 New Zealand won the inaugural World Test Championship final at Southampton with a comprehensive eight-wicket-win over India in the last session of Wednesday’s additional sixth day.

Chasing 139 in the fourth innings, New Zealand reached home losing only two wickets, thanks to captain Kane Williamson’s unbeaten 52 and Ross Taylor’s 47 not out.

The two senior batsmen shared a crucial, unbroken 96-run partnership for the third wicket to guide the Kiwis to a memorable victory.
Earlier, India were dismissed for 170 in their second innings. Tim Southee took wickets at both the top and bottom of the order in a haul of 4-48 in 19 overs.
Longtime new-ball partner Trent Boult struck twice in an over on the way to 3-39 in 15 overs with towering paceman Kyle Jamieson, following his first-innings 5-31, snaring India captain Virat Kohli for the second time in the match during a miserly return of 2-30 in 24 overs.

They would have had even fewer runs to chase had not Rishabh Pant, the innings top-scorer with 41, been dropped on five.

Pant and Rohit Sharma, out for 30 on Tuesday, were the only India batsmen to make more than 16.

New Zealand, with the weather set fair on a sunny day, now only needed to score at a run-rate of under three an over.
Few cricket fans around the world would begrudge New Zealand, a country with a population of around five million compared to India’s 1.3 billion, victory after their agonising Super Over loss to England in the 2019 50-over World Cup final at Lord’s.
But they entered this final match-hardened after a recent 1-0 series win in England, whereas India were playing their first Test since March.

Victory would give New Zealand’s men just their second major global cricket title after they beat India in the the 2000 Champions Trophy one-day final in Kenya.

After rain washed out two days of this match, the reserve day — a special provision for this Test — was used in the hope a two-year effort to crown red-ball cricket’s first official world champions would end with an outright winner.

Play resumed in bright sunshine on Wednesday in a match where there is total prize money of $2.4 million, with India 64-2.

Star batsman Kohli had added just five runs to his overnight eight when he fell to Royal Challengers Bangalore team-mate Jamieson for the second time in the Test, edging a delivery that bounced and moved late to wicketkeeper BJ Watling, in his final match before retirement.

And 71-3 became 72-4 when Cheteshwar Pujara, who took 80 balls to score his 15, edged Jamieson low to a diving Ross Taylor at first slip.

Pujara’s exit brought in the free-scoring Pant, whose batting heroics had helped India achieve a remarkable come from behind series win in Australia earlier this year.
But the wicketkeeper should have been out for five when he edged Jamieson, only for second-slip Southee, going across first slip, to drop a routine chance.

Pant, to the delight of India fans in the crowd, then whipped Southee past mid-on for four.
India were 130-5 at lunch, a lead of 98 runs, with Pant 28 not out and fellow left-hander Ravindra Jadeja unbeaten on 12.

Jadeja fell for 16 but Pant pressed on before a skied edge off Boult was brilliantly caught by Henry Nicholls running away from the pitch at point.

Two balls later, India were 156-8 when Ravichandran Ashwin was well held by Taylor at first slip.

That this might be New Zealand’s day was emphaised when tailender Mohammed Shami was caught by Tom Latham at fly-slip off Southee moments after skipper Willianmson had moved him to the rarely used position.

Italy reached the final of the European...