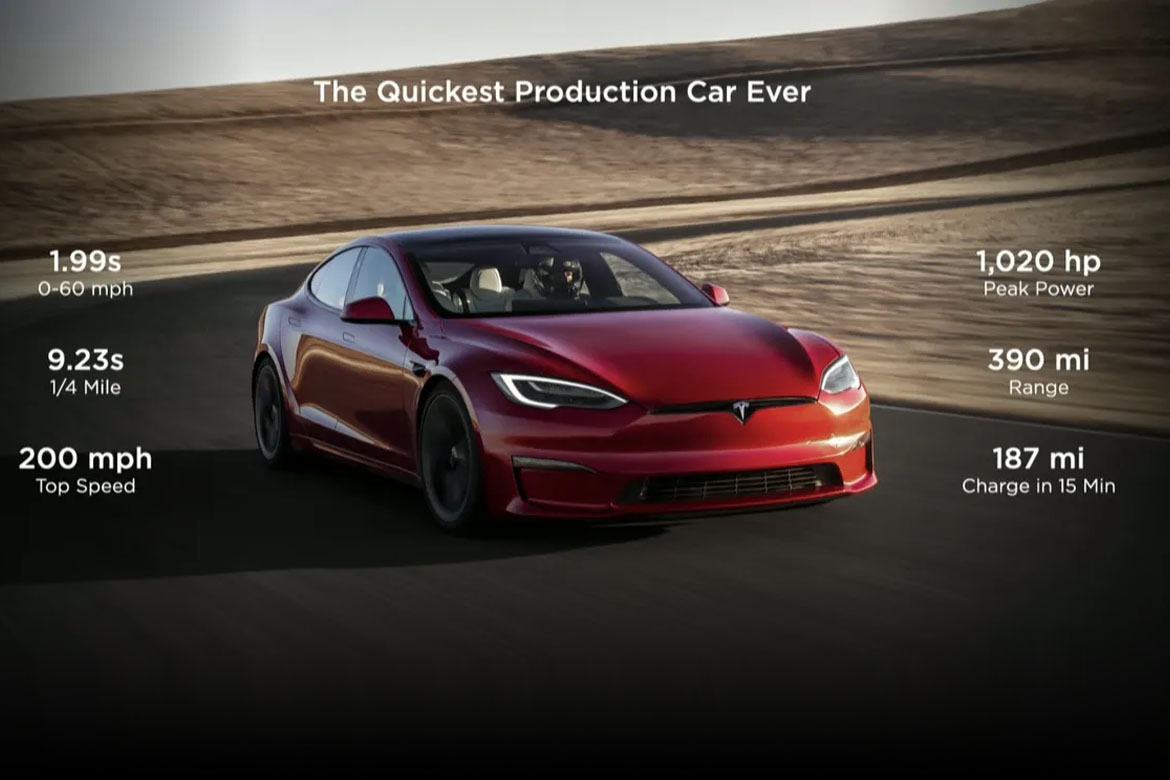 The Silicon Valley automaker has billed this new $130,000 version of the Model S — first announced in January and originally slated to ship in March — as the “quickest production vehicle ever made,” with the ability to go from 0-60mph in under 2 seconds. Its name is a reference to the unthinkable speed beyond “Ludicrous” in the comedy classic Spaceballs. It’s also expected to get around 390 miles of range. (Tesla is selling a less powerful version of the redesigned Model S with more range — 412 miles — that starts at just a hair under $80,000. Deliveries of those start later this year.)

Why so fast? “We’ve got to show that an electric car is the best car, hands down,” Musk said at Thursday night’s event. “It’s got to be clear [that] sustainable energy cars can be the fastest cars, the safest cars, [and] can be the most kick-ass cars in every way.”

“This car crushes,” he said.

“WE’VE GOT TO SHOW THAT AN ELECTRIC CAR IS THE BEST CAR, HANDS DOWN.”

On June 6, Musk announced Tesla had canceled the most expensive version of the new Model S, which was called Plaid Plus. That version, which had a starting price of around $150,000, was supposed to go 520 miles on a full battery. It was also supposed to be powered by the new 4680 lithium-ion battery cells that Tesla is developing. A redesigned Model X was also announced in January, but deliveries of that new SUV have been pushed back months, and Musk didn’t mention the updated SUV Thursday night.

Musk once shot down rumors of a Model S and Model X redesign in 2019, saying there was “no ‘refreshed’ Model X or Model S coming.” Instead, Musk said Tesla was always making minor improvements to both vehicles. But sales of both vehicles have stagnated in recent years as Tesla focused on the more affordable Model 3 sedan and Model Y compact SUV. The redesigned versions are a chance to boost sales of these older cars. The company seems confident enough in the new Model S Plaid that it raised the starting price by $10,000 earlier today.

Now, use your voice to write emails on mobile