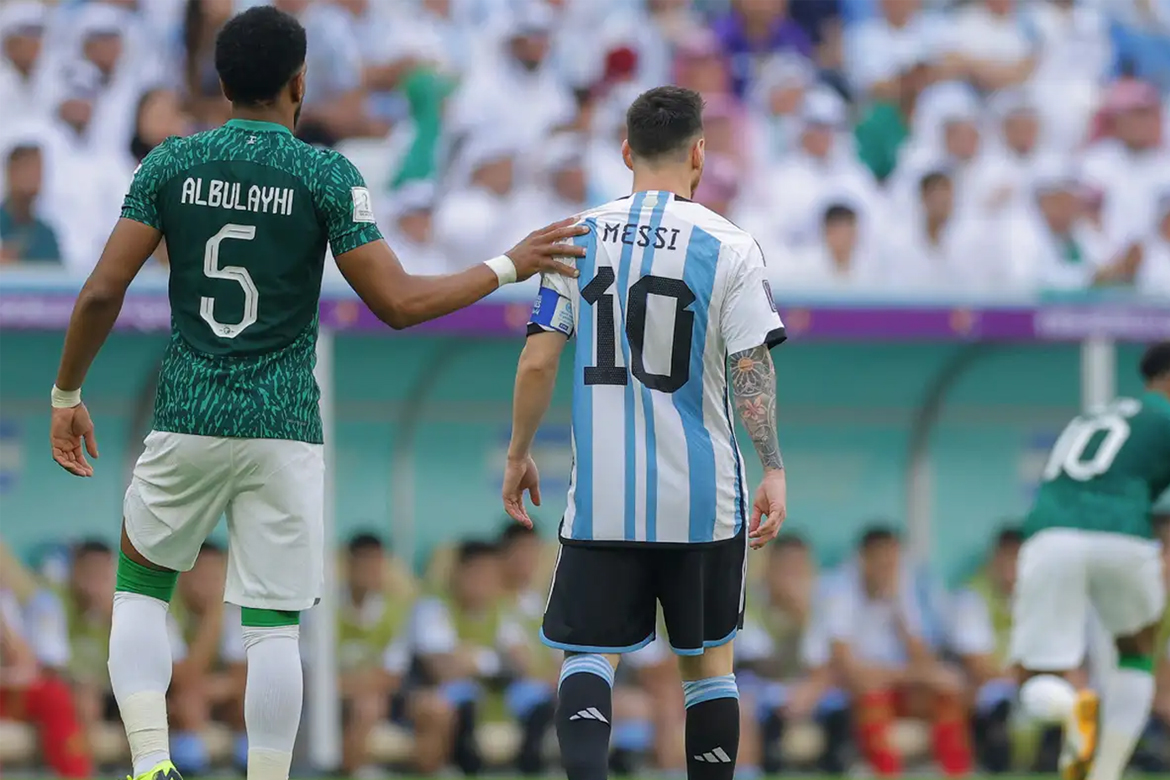 It will go down as one of the World Cup’s biggest shocks.

All the pre-match talk was about how this could finally be Lionel Messi’s year, how Argentina could be crowned world champions for the first time since 1986, how Saudi Arabia had no chance.

What a difference 90 minutes make.

As a heroic Saudi side celebrated their stunning 2-1 win with their jubilant fans in a deafening Lusail Stadium, Argentina’s disbelieving players crept off with their supporters shocked into almost total silence.

There was no sign of this result at half-time. Messi had slotted Argentina ahead from the penalty spot, three other efforts had been ruled out for offside and Saudi Arabia looked to be settling for damage limitation.

Then two Saudi goals in six crazy minutes early in the second half entirely changed the narrative and, despite plenty of prodding and probing from Messi and co, the underdogs valiantly held on to a result that will never be forgotten by the thousands of fans fortunate enough to witness it.

Saudi Arabia’s King Salman has even announced a public holiday on Wednesday in the wake of the win.

While their party spilled on to the streets of Lusail, how seismic was this result and what damage has it done to what is surely Messi’s last stab at World Cup glory?

“It’s a very heavy blow, a defeat that hurts, but we must continue to have confidence in ourselves,” said Messi. “This group is not going to give up. We will try to beat Mexico.

“This is the time to stick together, to turn the page and not think about what happened. We always said we were going to (try to) win every game and now more than ever.”

‘Our best ever footballing moment’

Ranked 51st in the world, Saudi Arabia had previously won three World Cup games, with the only time they progressed to the knockout stages coming in 1994.

Argentina, on the other hand, are ranked third in the world, came into the tournament on the back of a 36-match unbeaten run and were tipped by many to lift the trophy.

Northern Ireland’s 1-0 win against Spain in 1982, England’s loss to the United States in 1950, South Korea beating Italy in 2002 and Argentina losing to Cameroon in the 1990 opener are some of the past shocks remembered by many.

But this result will forever be mentioned in the same breath, with a hoarse Saudi fan describing the win on his way out as “our country’s best ever footballing moment by such a long way”. BBC Radio 5 Live presenter Mark Chapman described it as “seismic”.

Spanish football expert Guillem Balague, who wrote Messi the Biography, told BBC Sport: “This is what happens when you mix organisation and a sharp physique in this World Cup halfway through a season where everyone is at the top of their game or at least fresher than in a summer tournament.

“It is always easier to defend than to attack; everyone can run for hours. There has not been time to find offensive collective ways – the most complicated thing in football – but there has been enough to have a tight organised defence.

“We witnessed one of the biggest upsets in a World Cup, but I feel, for the reasons I have given above, not the last one. That is what makes the England result and performance even more impressive.”

Former Manchester City defender Nedum Onouha said: “We saw an Argentina side that were pushing and pushing but Saudi Arabia were comfortable in the way they were defending.

“At times we think football is predictable, and then things like that happens and you are reminded about why we love football.

“As long as you are committed and take the opportunities you have, anything is possible.”

Former England midfielder Joe Cole said on ITV: “That winning goal will inspire a generation. This is the World Cup started. This is an unbelievable result.”

Celebrations erupted throughout the Saudi capital Riyadh after the final whistle blew, with fans forming impromptu dance circles and waving the national flag from the windows of cars.

Turki al-Sheikh, an adviser at the Royal Court and head of Saudi Arabia’s General Entertainment Authority, announced on Twitter that admission fees would be waived at major theme parks and entertainment centres in Riyadh on Tuesday.

New York Times journalist Tariq Panja described how the result would go down in the history of Saudi Arabia.

He told BBC Radio 5 Live: “I’ve just spoken to one and asked what will this result mean for these players. He said, ‘They will get everything’. That means quite a lot when you’re talking about Saudi Arabia.

“The Saudis are the nearest country to the World Cup and a lot just drive over. It was three hours for one fan, 90 minutes for another fan.

“They’ve got a really big football culture – I don’t think we realise that in Europe. The fandom is certainly there and it was there in full effect today. They completely drowned out the Argentina fans.”

‘Don’t count Argentina out yet’

Argentina fans have turned out in good numbers in Qatar, with their blue and white shirts seen everywhere in Doha and ‘Messi 10’ sported on the back of most of them.

It was the same before the match in Lusail with the South Americans vocal with their songs and supremely confident when quizzed about their hopes of going all the way this year.

Now they face a real struggle to even get out of the group stage, with games against Mexico and Poland decisive if they are to recover from the gargantuan upset.

Balague said: “Teams that take the initiative, like Argentina did, need at least some individual solutions. And they did not find them.

“Their midfield did not get enough of the ball in between the lines to then take the ball to Messi. Plus every time anyone tried a dribble, to beat a defender – Angel di Maria mostly, Julian Alvarez when he came on – they were found by new defenders, always alert, tracking back in an organised manner.

“There was not enough movement around Leo, not enough spaces created. He was always surrounded by rivals. Everything was far too slow, too predictable for Argentina – impossible to make an impact.”

Former Argentina defender Pablo Zabaleta said: “Because many people were saying Argentina would be favourites to win the World Cup because of 36 games unbeaten and all that, there were a lot of expectations.

“That’s why I hate people saying that – because this is the World Cup, you cannot really under-estimate any team, this is the greatest competition in football.

“Can we still win it? Of course. We lost the first game in 1990 against Cameroon and then we reached the final so there is still a long way to go.”

The last time Argentina failed to qualify for the second round in a World Cup was in 2002, and South American expert Tim Vickery is not ruling them out yet.

“Argentina have got some regrouping today but I wouldn’t count them out yet.

“What are they going to do next? They’ll have to dig deep.”

According to China, gaming addiction among youth has been resolved